Use of this site indicates acceptance of the Privacy Policy and Terms of Use.
The information on this Website is not reliable and not intended to provide tax, legal, or investment advice. Nothing contained on the Website shall be considered a recommendation, solicitation, or offer to buy or sell a security to any person in any jurisdiction.
CEO.CA members discuss high-risk penny stocks which can lose their entire value. Only risk what you can afford to lose.
© 2022 - CEO.CA Technologies Ltd.
@newswire/foran-announces-follow-up-drill-results-from-the-tesla ↻
0 online
Today This week
Search Subscribe
Members of @newswire/foran-announces-follow-up-drill-results-from-the-tesla

VANCOUVER, BC, Aug. 16, 2022 /CNW/ - Foran Mining Corporation (TSXV: FOM) (OTCQX: FMCXF) ("Foran" or the "Company") is pleased to announce additional results from drilling at the recently discovered Tesla Zone on its McIlvenna Bay Project in Saskatchewan. Results in this release include remaining intercepts from the initial discovery hole (see our June 8, 2022 press release) and initial assays from a wedge hole testing up-dip potential.

Dan Myerson, Foran's Executive Chairman & CEO, commented: "To achieve these success rates and intercept these robust zones, at such an early stage in a new discovery, is truly remarkable. These results demonstrate the growing potential at the near-mine newly discovered Tesla Zone, and further illustrates the rarity of this tremendous scalable discovery. Additionally, and what is even more exciting, is that we have encountered high-temperature alterations at Tesla, which could correlate with higher-grade gold and copper values, similar to other base and precious metal deposits within the Flin Flon Terrane. Our exploration team and strategy are working, and we are successfully unlocking this prolific district on our path towards building Canada's next great mining camp, we look forward to sharing more exciting exploration results later this year, throughout 2023, and beyond." 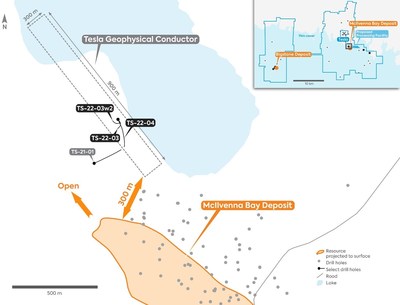 Since the initial discovery of mineralization in the Tesla Zone, the Company has continued with follow up drilling to better understand the controls on the mineralization and the potential geometry of the zone. To date, one wedge (TS-21-03w2) has been completed from the original discovery hole and a second hole (TS-22-04) has been drilled from surface from the same drill pad, oriented to obtain a larger spacing of the intersections along the mineralized horizon. Both holes appear to have intersected the Tesla Zone.

TS-22-04 was completed from surface from the same drill pad at a shallower angle than the original hole in an attempt to obtain a spread of the intersections along the mineralized horizon. The hole intersected the mineralized horizon approximately 100m up-dip from the discovery hole and approximately 200m away from TS-22-03w2, where it encountered a zone of significant alteration and several zones of disseminated and fracture fill sulphide mineralization, indicating that the intersection lies on the periphery of the mineralization. Assays are pending from the laboratory, but it is currently interpreted that this drill hole intersected the upper margin of the Tesla Zone which is consistent with the geophysics model and helps to confirm the northeast dipping geometry of the mineralization.

Geophysical surveys outline a conductor with potential dimensions of ~900m (strike) by 300m (depth) associated with the Tesla Zone (Figure 1). The results herein confirm that this conductor is, in part at least, a well mineralized zone of copper and zinc sulphides. In order to properly test the conductor, given its geometry and location adjacent to the shoreline, future drill holes will need to be completed from Hanson Lake. An application is being finalized for a winter exploration permit that will allow for a large winter drill program to be completed targeting expansion of the Tesla zone. 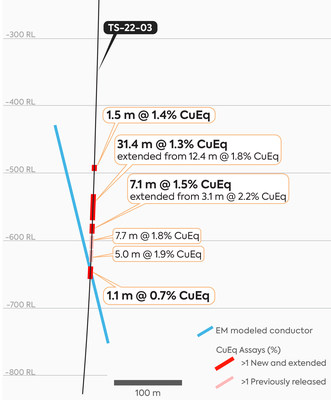 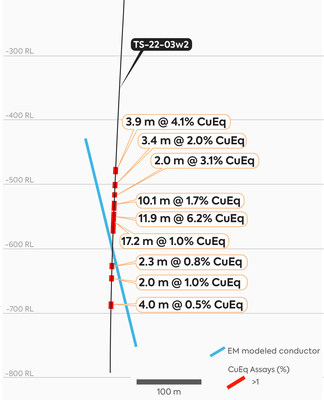 Additional follow up drilling at Tesla is planned for later in the year after the winter freeze. Foran's helicopter-supported 7,000m summer drill program is currently underway at the Marconi Prospect located on the Bigstone Property, 25km west of McIlvenna Bay. It is currently anticipated that the summer program will continue into the fall and also include further testing of the Flinty Prospect, located 7km to the southeast of McIlvenna Bay, and other regional target areas in the Hanson Lake District as the Company continues to build on its exploration pipeline to support the potential development of a central milling facility envisioned for the McIlvenna Bay deposit.

Drilling was completed using NQ size diamond drill core and core was logged by employees of the Company. During the logging process, mineralized intersections were marked for sampling and given unique sample numbers. Sampled intervals were sawn in half using a diamond blade saw. One half of the sawn core was placed in a plastic bag with the sample tag and sealed, while the second half was returned to the core box for storage on site. Sample assays are performed by the Saskatchewan Research Council ("SRC") Geoanalytical Laboratory in Saskatoon, Saskatchewan. SRC is a Canadian accredited laboratory (ISO/IEC 17025:2017) and independent of Foran. Analysis for Ag, Cu, Pb and Zn is performed using ICP-OES after total multi-acid digestion. Au analysis is completed by fire assay with ICP-OES finish. Any samples which return results greater than 1.0 g/t Au are re-run using gravimetric finish. A complete suite of QA/QC reference materials (standards, blanks and pulp duplicates) are included in each batch of samples processed by the laboratory. The results of the assaying of the QA/QC material included in each batch are tracked to ensure the integrity of the assay data.

Foran Mining is a copper-zinc-gold-silver exploration and development company, committed to supporting a greener future, empowering communities and creating circular economies which create value for all our stakeholders, while also safeguarding the environment.  The McIlvenna Bay project is located entirely within the documented traditional territory of the Peter Ballantyne Cree Nation. The Company also owns the Bigstone project, a resource-development stage deposit located 25km southwest of its McIlvenna Bay project.

McIlvenna Bay is a copper-zinc-gold-silver rich VHMS deposit intended to be the centre of a new mining camp in a prolific district that has already been producing for 100 years. McIlvenna Bay sits just 65km West of Flin Flon, Manitoba and is part of the world class Flin Flon Greenstone Belt that extends from Snow Lake, Manitoba, through Flin Flon to Foran's ground in eastern Saskatchewan, a distance of over 225km.

Inherent in forward-looking statements are known and unknown risks, estimates, assumptions, uncertainties and other factors that may cause the actual results, performance or achievements of the Company to be materially different from any future results, performance or achievements expressed or implied by the forward-looking statements contained in this news release. These factors include management's belief or expectations relating to the following and, in certain cases, management's response with regard to the following: The Company's ability to successfully negotiate and settle definitive agreements upon acceptable terms and conditions with the Investor and lenders under the senior secured facility respectively and achieve completion of the various transactions thereunder; the description of the expected key terms of the proposed investment, the anticipated use of proceeds and benefits to the Company resulting from the proposed investment; the status and expectations regarding the senior secured credit facility; Ownership and reliance on the Company's mineral projects; The Company's history of losses and potential inability to generate sufficient revenue to be profitable or to generate positive cash flow on a sustained basis; The Company's statements about the expected life of mine, productive capacity and other technical estimates on its projects, and the Company's reliance on technical experts with respect thereto; The Company's exposure to risks related to mineral resources exploration and development; Impact of the COVID-19 Pandemic, Infectious Diseases and Other Health Crises on the Company; Global financial volatility and its impact on the Company; The impact of the Russia-Ukraine conflict; Government, securities, and stock exchange regulation and policy; Legal proceedings which may have a material adverse impact on the Company's operations and financial condition; Capital market conditions and their effect on the securities of the Company; Insurance and uninsurable risks; Environmental, health and safety regulation and policy; Mining hazards and risks; Title rights to the Company's projects; Indigenous peoples' title and other legal claims; Mineral resource and mineral reserve estimates; Uncertainties and risks relating to the Feasibility Studies; Fluctuations in commodity prices, including metals; Competition; Expertise and proficiency of management; Limited operating history; The availability of future financing; Dilutive effects; Impacts of global climate change and natural disasters; Inadequate infrastructure; Relationships with local communities; Reputational damage; Risks arising from the Company's reliance on financial instruments; Risks arising from future acquisitions; Management conflicts of interest; Security breaches of the Company's information systems; and the additional risks identified in our Annual Information Form dated June 8, 2022 and other securities filings with Canadian securities regulators available at www.sedar.com.