Use of this site indicates acceptance of the Privacy Policy and Terms of Use.
The information on this Website is not reliable and not intended to provide tax, legal, or investment advice. Nothing contained on the Website shall be considered a recommendation, solicitation, or offer to buy or sell a security to any person in any jurisdiction.
CEO.CA members discuss high-risk penny stocks which can lose their entire value. Only risk what you can afford to lose.
© 2022 - CEO.CA Technologies Ltd.
@accesswire/sokoman-reports-additional-strong-results-from-the-9a2ff ↻
0 online
Today This week
Search Subscribe
Members of @accesswire/sokoman-reports-additional-strong-results-from-the-9a2ff

by @accesswire on 19 May 2022, 07:17
Sokoman Reports Additional Strong Results from the 75 Zone; Moosehead Project, Central Newfoundland

75 Zone Extended to North and South: Deepest Intersection of Visible Gold to Date at Eastern Trend

ST. JOHN'S, NL / ACCESSWIRE / May 19, 2022 / Sokoman Minerals Corp. (TSXV:SIC)(OTCQB:SICNF) is pleased to report additional high-grade assays from the Moosehead Project including multiple holes from the expanding 75 Zone (Figure 1) which has now been essentially linked with the main Eastern Trend/Footwall Splay mineralization. In addition, MH-22-418, completed this week (assays pending) has intersected the deepest occurrence of visible gold to date on the property at a downhole depth of 352 m in a step-out below the current limit of mineralization in the Eastern Trend. 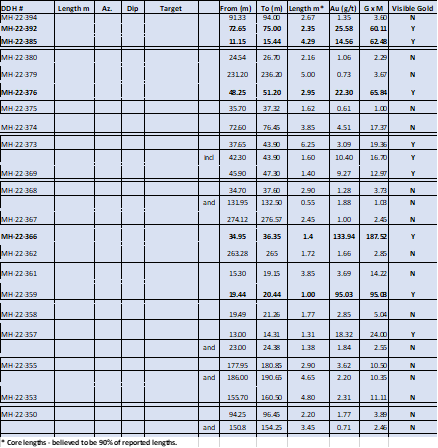 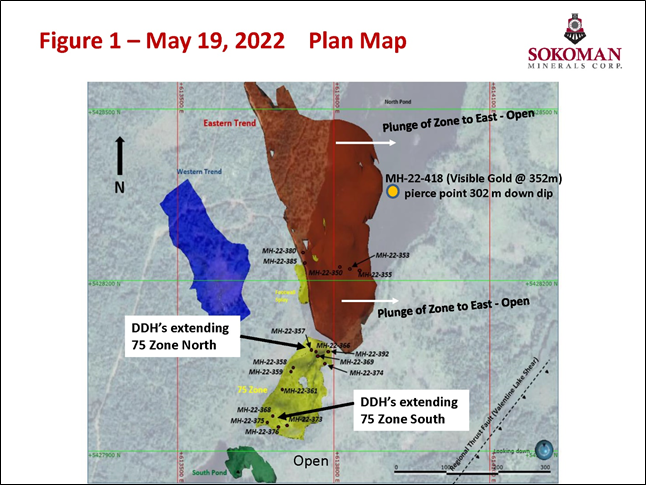 Tim Froude, President, and CEO of Sokoman says: "We are pleased to be reporting results from some of the first holes from the 2022 program and to announce that the barge drill rig is back in the water and ready for an extensive 2022 campaign. We are also pleased to report that the first reconnaissance drilling in the southern half of the property, 2 km southwest of the main mineralized trends at Moosehead, and designed to test the Valentine Lake structural corridor, has returned significant gold values. Holes MH-22-379, 383, 386, 389 and 395, a five-hole fence centered roughly on the inferred location of the Valentine Lake corridor, all intersected mineralization with the best results from hole MH-22-379, that was drilled in the center of the five-hole fence. More drilling is planned for this area over the course of the summer.

The two land-based drills that are testing the northern and depth extensions of the Eastern Trend have intersected strong mineralized zones including significant quartz +/- sulphide (boulangerite, sphalerite, pyrite) veining with the deepest cut yet containing visible gold (9 specks of visible gold) within a 5 m - 10 m section of MH-22-418 at 352 m down hole (302 m downdip from surface), which is 50 m deeper than any previous high-grade intersection (Figure 2). 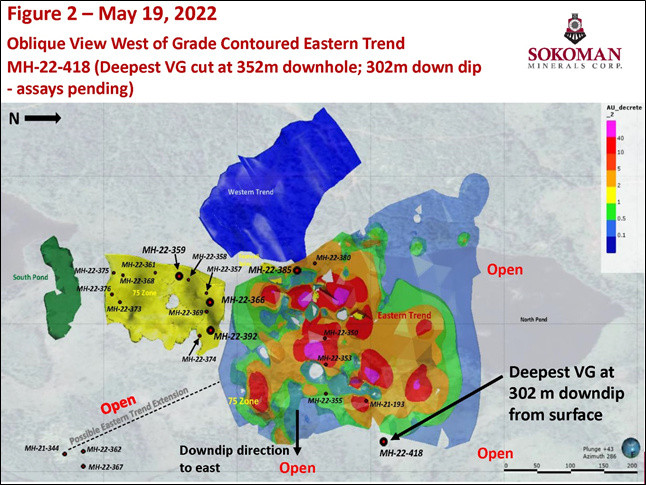 In addition, results have been received for a fence of five holes (Figure 3) which tested the Valentine Lake Shear Zone 1.5 km southwest of any previous drilling near a 54 grain, gold-in-till anomaly, returning multiple zones of low-grade mineralization, similar to mineralization recently reported close to the southern claim boundary by K9 Gold. The K9 Gold drilling is focused about 2 km southwest of, and directly on trend with our five-hole fence which highlights the prospectivity of the Valentine Lake Shear system on the Moosehead property. Diamond drill hole MH-22-379, the middle hole of the five-hole fence, cut a 5.0 m section assaying 0.73 g/t Au including 2.70 m of 1.10 g/t Au in veined / sulphide-rich mafic volcanic rocks similar to the geological setting at the K9 property. Recently reported gold mineralization in MH-21-344 (2.27 g/t Au over 4.0 m including 9.70 g/t Au over 0.50 m), located 1.5 km northeast of hole MH-22-379 clearly demonstrates the potential for locally higher grades along this largely untested section of the property. MH-22-362 and 367, immediately east of MH-21-344, further support the presence of a possibly significant mineralized system independent of the currently known zones. Additional drilling will be carried out in the area as part of the summer program. 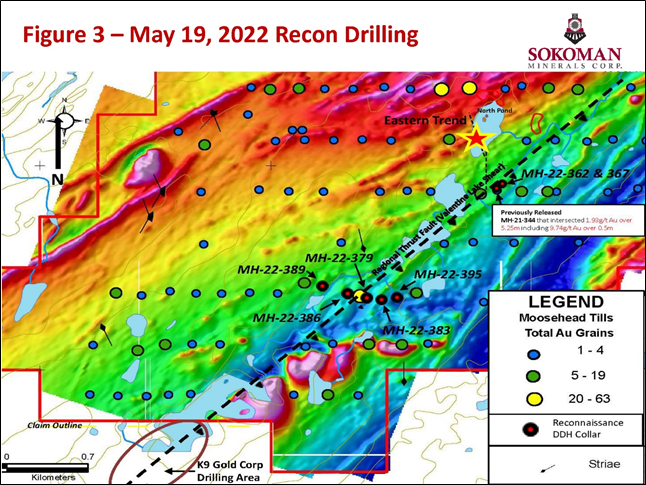 The Moosehead Project has five zones of open-ended gold mineralization focused around the Eastern Trend in the central portion of the property with mineralization defined over a 600 m strike length and over a 300 m downdip. The Company is well funded with more than $12 million in the treasury, with $6 Million earmarked to complete the ongoing 100,000 m drilling program at Moosehead where 48,000 m remains to be drilled. The 2022 drill program will focus on extending the zones of high-grade gold along strike and to depth and will also test the emerging potential of the rest of the property.

This news release has been reviewed and approved by Timothy Froude, P.Geo., a "Qualified Person" under National Instrument 43-101 and President and CEO of Sokoman Minerals Corp.

To ensure a working environment that protects the health and safety of the staff and contractors, Sokoman is operating under federally and provincially mandated and recommended guidelines during the current COVID-19 alert level.

Samples, including duplicates, blanks, and standards, were submitted to Eastern Analytical Ltd. in Springdale, Newfoundland for gold analysis. All core samples submitted for assay were saw cut by Sokoman personnel with one-half submitted for assay and one-half retained for reference. Samples were delivered in sealed bags directly to the lab by Sokoman personnel. Eastern Analytical Ltd. is an accredited assay lab that conforms to the requirements of ISO/IEC 17025. Samples with possible visible gold were submitted for total pulp metallics and gravimetric finish. All other samples were analyzed by standard fire assay methods. Total pulp metallic analysis includes: the whole sample is crushed to -10 mesh; then pulverized to 95% -150 mesh. The total sample is weighed and screened to 150 mesh; the +150 mesh fraction is fire assayed for Au, and a 30 g subsample of the -150 mesh fraction is fire assayed for Au; with a calculated weighted average of total Au in the sample reported as well. One blank and one industry-approved standard for every twenty samples submitted is included in the sample stream. Random duplicates of selected samples are analyzed in addition to the in-house standard and duplicate policies of Eastern Analytical Ltd. All reported assays are uncut.

Sokoman Minerals Corp. is a discovery-oriented company with projects in the province of Newfoundland and Labrador, Canada. The Company's primary focus is its portfolio of gold projects; flagship, advanced-stage Moosehead, Crippleback Lake (optioned to Trans Canada Gold Corp.) and East Alder (optioned to Canterra Minerals Corporation) along the Central Newfoundland Gold Belt, and the district-scale Fleur de Lys project in northwestern Newfoundland, that is targeting Dalradian-type orogenic gold mineralization similar to the Curraghinalt and Cavanacaw deposits in Northern Ireland. The Company also recently entered into a strategic alliance with Benton Resources Inc. through three, large-scale, joint-venture properties including Grey River, Golden Hope and Kepenkeck in Newfoundland.

Sokoman now controls, independently and through the Benton alliance, over 150,000 hectares (>6,000 claims - 1500 sq. km), making it one of the largest landholders in Newfoundland, in Canada's newest and rapidly-emerging gold districts. The Company also retains an interest in an early-stage antimony/gold project (Startrek) in Newfoundland, optioned to White Metal Resources Inc., and in Labrador, the Company has a 100% interest in the Iron Horse (Fe) project which has Direct Shipping Ore (DSO) potential.

The Company would like to thank the Government of Newfoundland and Labrador for past financial support of the Moosehead Project through the Junior Exploration Assistance Program.

Investors are cautioned that trading in the securities of the Corporation should be considered highly speculative. Except for historical information contained herein, this news release contains forward- looking statements that involve risks and uncertainties. Actual results may differ materially. Sokoman Minerals Corp. will not update these forward-looking statements to reflect events or circumstances after the date hereof. More detailed information about potential factors that could affect financial results is included in the documents filed from time to time with the Canadian securities regulatory authorities by Sokoman Minerals Corp.